Who doesn’t just love Tinkerbell? Toddler girls absolutely adore the Disney Fairies, and this bright, colorful pink duvet really puts a huge smile on her face. She will just love seeing her three favorite fairies when she crawls into bed each and every night.

Of course, every mom loves seeing the sweet message of "Lasting Friends" scrolled across it. Not to mention that it also has a gorgeous pink and purple floral pattern on the reverse side.

In addition to how great it is to look at, many moms find it so much more convenient to use this Tinkerbell duvet cover as toddler bedding instead of just a comforter and a flat sheet. When your toddler makes messes, and we all know that there most certainly will be messes, you can simply remove the duvet cover and pop it in the washer to get out those toddler stains. That is a much easier time for you than trying to fit the large comforter into your washing machine, if it fits at all... That bulky comforter by itself would take up an entire load!

We believe we speak for other moms when we say that no one has the time to add more loads of laundry to their lives. They have better ways to spend our time on the weekends than washing their kiddo’s bedding.

And since you are able to wash it more frequently with no difficulty, this Tinkerbell nursery bedding duvet cover set really is far more hygienic than a comforter. Probably you never wanted to take the extra time to wash that unwieldy comforter as a separate load on your weekends and had a tendency to let too much time pass before finally getting around to washing that heavy thing. It is safe to say that no one wants their kiddos sleeping in dirty toddler bedding! This pink Tinkerbell toddler girl duvet cover set solves that problem. In fact, it is so easy to change out the bedding that you can have two different designs for Tinkerbell princess decor. It is practical to have another design as well because changing and washing the cotton duvet cover is so fast and simple that switching between the two of them is a breeze. It is also worth a mention that the matching Disney Fairies pillowcases is just as easy to care for. If you weren’t quite sure about buying a new toddler-sized duvet, we encourage you to snatch this one up immediately.

This bedding is not only beautiful to look at with its sharp vivid colours, it’s also very well made, the fabric feels amazing quality! It’s not every day you come across a Tinkerbell bedding either.
We love it thank you! 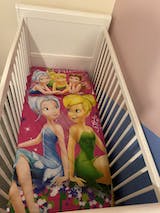 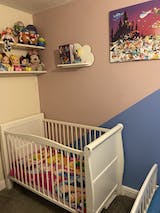 This bedding is not only beautiful to look at with its sharp vivid colours, it’s also very well made, the fabric feels amazing quality! It’s not every day you come across a Tinkerbell bedding either.
We love it thank you!